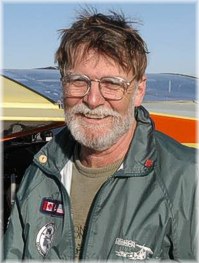 The pair settled on a farm in what was then Pickering (now Ajax), and had three children: Alaine, Bill and Louise.

During a stop in Mexico, William met 17-year-old Paula Vockeroth, who was there studying weaving. And, in 1967, when Paula returned to Canada, the then-27-year-old Mr. Lishman came back with her.

In 1988, Mr. Lishman began working on the family's dream home – an underground structure built into the side of a hilltop near Port Perry, an area they nicknamed Purple Hill (for the lavender-coloured weeds that grew there). The structure was part-igloo and part-cave – rooms that were entirely circular, with no right angles.

Celebration of life to be held on Saturday, January 20th, 1 - 4 pm at the Robert McLaughlin Gallery in Oshawa. Any and all are welcome to attend.

More of William Lishman's life is posted at the Globe and Mail.

In lieu of flowers, the family is asking that guests consider making donations to the International Conservation Fund of Canada (icfcanada.org) or to Green Durham Association (greendurham.ca).

Both organizations and their causes were important to Bill.