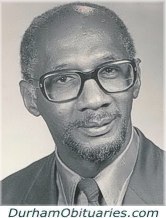 He is the father of Arun and Yashin (Gretchen): the grandfather of Hannah and Dexter.

He served in the Royal Air Force during World War II, was ordained as a Theravadan Buddhist Monk in Thailand and acquired his PhD in clinical psychology from Edinburgh University.

He founded Pinewood Centre in Oshawa.  As well, he was a raconteur, photographer and musician of note.

The family would like to thank the caring staff of Oshawa General Hospital.

A Memorial Service will be held at a later date at ARMSTRONG FUNERAL HOME, 124 King Street East, Oshawa.

Memorial donations to the  CHARITY of your choice would be appreciated.