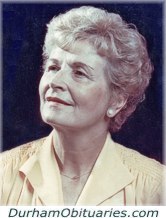 It is with great sadness that we announce the passing at home of Margaret Wyrozub in her 94th year on Saturday, January 20th, 2018.

Margaret was born on February 5th, 1923 in Shabaqua, Ontario, just north of Thunder Bay, to John and Julia Derkacz.

Margaret lived a full life spending 30+ years as a Supervisor for Versa Foods in General Motors Oshawa, and in retirement as a member of the Women’s Auxiliary at Holy Cross Church and serving the needs of patients as an Auxiliary Volunteer at Oshawa General Hospital.

The family is very grateful to the many people from Community Care Durham who provided thoughtful and compassionate support for Margaret as her health declined over the past year. The Doctors and Support Staff at Lakeridge Health Oshawa in the Pallative Care Unit treated Margaret with respect and dignity.

Thank you to Father Keith Callaghan of Holy Cross Parish for his spiritual comfort.

In lieu of flowers memorial donations will be gratefully accepted to Canadian Cancer Society.