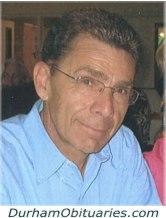 GAMBLE, Harry   -  After a lengthy illness, peacefully passed away at Lakeridge Health Whitby on February 1, 2018 in his 72nd year.

Loving father of Terry (the late Juanita) and the late Tracey.

Cherished brother of Jim, Barb, Ruth, Bruce (Mary), David (Lynn), Donna (David) and the late Marie, Bonnie & Roy. He will be missed by his mother-in-law Mary.

Survived by his brother -in-law Ken. He will be fondly remembered by his many nieces, nephews, and cousins.

Visitation will be held at the  NORTHCUTT ELLIOTT FUNERAL HOME, 53 Division St. Bowmanville on Saturday February 10 from 12 pm - 1 pm. A Funeral Service will follow in the Chapel at 1 pm.

Memorial donations may be made to Canadian Diabeties Association or to Cystic Fibrosis.