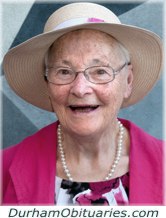 MITCHELL, Mavis (nee Shorthouse) - Passed away peacefully, on Saturday, February 10th, 2018, at Lakeridge Health Oshawa after a short illness at the age of 92 years.

As a young woman, Mavis joined the war effort as a WAAF stationed at RAF Finningley where her main job was to assist preparing aircraft for missions.

It was during this time that she met her future husband, Bill. They were married in 1951 and moved to Kirkcaldy, Fife where their family grew to 7 children. Prompted by growing opportunities in Canada, Mavis and Bill moved their family here and settled in Scarborough in 1963.

As the children grew up, Mavis took a courageous step and returned to school and graduated in 1974 as a registered nurse.

She enjoyed a distinguished career as a respected Psychiatric Nurse, working on both sides of the Atlantic.

Retiring at age 66, Mavis became an active volunteer in local senior’s care programs, and knitting countless warm hats for those in need.

She leaves behind children Bill, Shona, Gillian, John and Lorraine along with 14 grandchildren and 9 great grandchildren. Mavis was predeceased by her husband Bill, her son David, and her daughter Jeannette.

There will be a private family service in Oshawa.

In lieu of flowers, memorial donations to Alzheimer Research would be appreciated. She will be sadly missed.