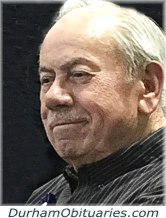 Harry was doing what he loved to do best, enjoying the beautiful Canadian outdoors and that is where he spent his last precious moments.

We are very sad to announce the passing of our dear Tato and Gigi on Sunday, February 11, 2018.

Predeceased by his wife Zenovia (Zenia) Diachenko and his mother-in-law Sophia Diachenko.

Viko Harry will be missed by many of his nieces, nephews, godchildren family and friends.

Harry was born on May 3, 1927 in Holoskowyczi, Ukraine, the son of Maria Yamuke and Ivan Mandziuk. He was also predeceased by his sisters Zoska, Fedorka and Stephania.

At age 15, Harry was taken away from his family to work on a German farm during the Second World War. When the war ended he joined the American Military Police to guard Prisoners of War.

In 1947 Harry boarded the General Stewart U.S. warship and journeyed to Canada. He worked for six months in a lumber mill near Abitibi before making his way to Oshawa and General Motors.

Harry retired at age 65 and was a proud employee for more than 42 years.

On October 20, 1956 he married Zenia and together, with tremendous support from Grandma Sophia, they raised three children with strong Christian values and a passion for their Ukrainian heritage.

Harry served for more than a decade as president of St. George the Martyr Ukrainian Catholic Church, where he was later distinguished as a lifetime member of the parish council. He was also a founding member of St. GUMA, (St. George’s Ukrainian Men’s Association), and was named an honourary member of that organization as well.

Over the years he has always been very active in the Ukrainian community: UNO Hall, soccer at Dnipro Hall, acting in locally produced Ukrainian films, Fiesta Week and singing with the Trembita choir.

Most of all our Tato was proud of the life he lived, the experiences he had and the people he loved so dearly. He never, ever, forgot his Ukrainian roots, but was so very proud to be Canadian!