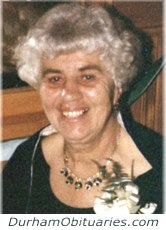 She is survived by her son John and daughter Sophia and by a large extended family both here and in Poland.

After surviving WW2 in Warsaw, where she played a role in the Polish Resistance, and then the Soviet era, she finally arrived in Sudbury in 1962 to start a new life.

Shemarried Czesław Cal (d. 1979) and was a homemakerwho became famous for her “pączki”.

A heartfelt thank you is extended to the staff of Bendale Acres Nursing Home in Scarborough on behalf of her children. In lieu of flowers donations to The Alzheimer Society of Canada would be appreciated.

Resting at the ARMSTRONG FUNERAL HOME at 124 King Street East in Oshawa.