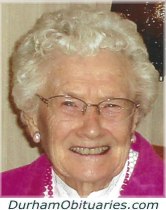 WOOD, Erma Gwendolyn (nee Hall)  - Passed away peacefully at Lakeridge Health Oshawa on February 21, 2018 at the age of 94.

Cherished grandmother of Karen Graham (Craig) of Orono and Mark Rottiné of Courtice; Great Gram to Brandt and Blair Graham.

Erma was one of ten children born to Fred and Daisy Hall in Sharon Ontario. She moved to Whitby at the age of 19 to teach at Dr. Robert Thornton School and to farm with her husband Don until 1972 when they sold the farm and finally got to enjoy some travel.

Widowed in 1996, Erma carried on in their home on Dundas Street until 2006 when she moved across the street to an apartment at Durham Christian Homes overlooking the farm.

She was a consummate gardener and was dedicated to her community, notably volunteering at Sunnycrest Nursing Home for more than 30 years. She enjoyed remarkably good health and lived independently in her apartment until the very end, taking great pleasure in weekly card games, regular exercise classes, daily walks and spending time with family and friends. She was a strong, independent lady who will be fondly remembered and truly missed.

Visitation will take place at W.C. TOWN FUNERAL CHAPEL, 110 Dundas St. E. in Whitby on Saturday , February 24, beginning at 9:00am and followed by a funeral service in the Chapel at 11:00am.

In lieu of flowers, memorial donations to the CHARITY of your choice in her honour would be greatly appreciated.