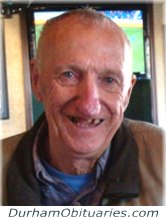 TOWNSON, Jack - It is with a heavy heart that I announce the passing of my father Jack (John) Alexander Townson on February 23, 2018 at the age of 77 years old while living out his recent years at Thorntonview LTC in Oshawa, ON.

Born in South Porcupine, Cochrane, ON., on May 16th, 1940 to his parents John Frederick Earl Townson and Susan Dale Townson (nee Kunder).

He is survived by his siblings Nancy Pingle (nee Townson) and Gord Townson; his sons Robert Townson and Richard Townson and his only grandson Wyatt Townson.

Celebration of Life Service details will be announced once confirmed.

Messages of condolence and shared memories can be left for the family by visiting barnesmemorialfuneralhome.