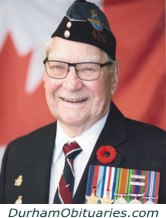 HEWETT, Henry James “Chick” - Peacefully at Lakeridge Health Oshawa with his family by his side on Wednesday, February 28, 2018, at 96 years of age.

Beloved husband of the late Betty.

Cherished father of Glen and his wife Anita and Wendy and her husband Jim.

Adored Grampa of Lauren (Tim), Kerry, Sam and Jared, and Great Grampa of Olivia and Emily.

He will be fondly remembered by his extended family and many friends.

Chick was a WWII Veteran and served overseas as a Lancaster Navigator in Bomber Command. He was a 60 plus year member and Past President of the 420 Wing. Having lived his entire life in Oshawa he previously served as president with the Oshawa Jaycee’s, Oshawa Ski Club, Oshawa Tennis Club and was a member of the Ontario Regiment Association.

Visitation will be held at the OSHAWA FUNERAL HOME, 847 King Street West on Sunday, March 4th from 2 – 4 and 6 – 8 p.m. Funeral Service will be held in the Chapel on Monday, March 5th at 11:00 a.m. Interment Mount Lawn Cemetery.

Memorial donations may be made to 420 Wing, to be used for their charitable contributions to the community.

Online condolences may be made at oshawafuneralhome.