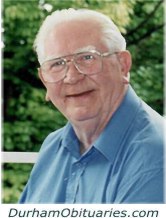 As a youth, he attended the Dundee Technical College but once he was of age, he enlisted in the Royal Air Force. He told many marvelous stories over the years about his education and travel during the war, from becoming a pilot and earning his wings and sergeant’s rank, as well as his responsibilities overseas in Bombay, Harbanspura, Amritsar, Calcutta and Singapore, before his 4 years of service were completed.

In 1968 Jim determined that the family would immigrate to Canada and for that we will always be grateful. Jim was a devout Catholic and supported many of the church’s charities at home and overseas. He was an avid gardener. As children, we ate fresh strawberries, rhubarb and any vegetable the Scottish growing season would permit. Later, he experimented on the cross pollination of our many rose bushes and then he grew tomatoes hydroponically, long before it was commonplace.

He was committed to keeping up with technology. He took computer courses until he was well into his 80’s. When he retired from the Toronto Star – where he worked for the last 17 years of his career – he was often found in the kitchen, chopping vegetables for a soup or a stew and his Christmas dumpling was a treasured tradition.

Jim lived at home in remarkably good health right up till the end, taking great pleasure in driving himself and Mary around Oshawa to their favourite breakfast or lunch spots. He was truly a gentleman who will be fondly remembered and truly missed.

The family would like to thank Dr. Andrew Wilk for his care and kindness. There will be a private family service.