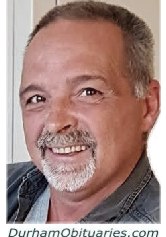 Terry was predeceased by his mom, Rachel Rigby in 2006.

Terry was a devoted father, grandfather and friend.

He had a passion for collecting coins and loved to share his knowledge through teaching. Terry graduated from the Chemical Engineering program at Durham College in 2008 with President’s Honours and joined the faculty in 2009.

He was well known as a jack-of-all trade and was always willing to lend a hand. He will be deeply missed by his family, friends, colleagues and everyone who knew him.

A Funeral Service will be held in the Chapel on Saturday March 17th at 11 am, with visitation one-hour prior.

If desired, memorial donations may be made to a CHARITY of your Choice.