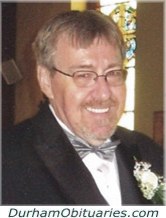 Surrounded by love, with his wife by his side, Ian passed away after a brief illness at Peterborough Regional Health Centre on Wednesday March 14th, 2018

He was predeceased by his parents William & Mary Paterson.

Ian is survived by his mother in law, Congettina Dell’Arte, his sister in law Maria Dell’Arte (Salvo Cerruto) and his nieces Ylenia and Marta.

Visitation will be held at  NORTHCUTT ELLIOTT FUNERAL HOME , 53 Division Street North, Bowmanville, Ontario on Monday March 19th, 2018 from 4 – 7 pm. A Knights of Columbus Rosary will be said at 7 pm.

A Mass of Christian Burial will be held at ST. JOSEPH’S ROMAN CATHOLIC CHURCH, 127 Liberty Street South, Bowmanville, on Tuesday March 20th at 11 am.

Memorial donations may be made to Epilepsy Durham Region or The Canadian Cancer Society.