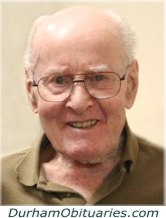 CLEMENT, James “Jim” - (WWII Veteran - RCAF)  It is with great sadness that the family of Jim Clement announce his passing on Tuesday, March 27th, 2018 at Hillsdale Estates, at the age of 95.

He was predeceased by his wife, Myrtle (Crawford) in 1996.

Jim was also predeceased by his second wife, Joy (Tullock) in January of 2012. He will be fondly remembered by Susan Tullock (Dale - predeceased 2013) and Brenda Tullock (Danny – predeceased 2016) and their families. Jim was one of 7 children born to James and Margaret Clement in Port Hope, Ontario.

A very heartfelt and most sincere thank you to Dr. MacIntosh and the exceptional staff of Hillsdale Estates – Maplegrove.

If you so choose to, donations in Jim’s memory may be made to the  CHARITY of your choice.