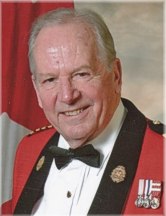 MURPHY, Colonel John E.L., CD, BASc,  -  After enjoying a long, happy, healthy life with a wonderful lady and opportunities to actively pursue a variety of interests, John died March 26, 2018 in his 90th year at the Uxbridge Cottage Hospital.

He worked at DuPont Canada Incorporated for 41 years attaining various sales manager positions in the Textile Fibers Department and retiring in 1991.

While at university, he enrolled in the Canadian Officers Training Corps leading to a commission as a Lieutenant, Royal Canadian Army Service Corps in 1949.

Since 1953, the family has been spending their summers at Lake Kasshabog in the Kawarthas.

Cremation with a private family interment is being planned for later.

In lieu of flowers, the family asks that contributions be made in John's memory to the Uxbridge Cottage Hospital Foundation.