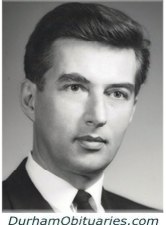 In 1950 he made the best decision of his life, marrying his beloved wife, Ethel, who sadly predeceased him in Oct. 2017.

He is predeceased by his wife Ethel and sister Norma (Hughie).

Walter Maynard Shaw was a modest man, but one of the best, a thoughtful, kind man of superior intellect and integrity.

A memorial celebration will be held at the ARMSTRONG FUNERAL HOME, 124 King St, Oshawa, on Thursday, May 3rd, 3 – 5 pm.

Memorial donations are appreciated, to Dying With Dignity, or to CHARITY of one’s choice.