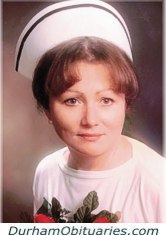 Unexpectedly at Sunnybrook Hospital, Janet passed away on May 12.

A long-time resident of Whitby, ON, at heart Janet was always a small-town girl from Manotick, ON where her father Ron Watson and brothers Jeff and Doug still reside.

Janet’s most favourite place to be was on the shores of the Passamaquoddy at their second home lovingly known as the West Bay House in St. George, NB.

It was at the West Bay House where friends and family were welcomed and made to feel at home by Janet’s generous hospitality and joyful spirit.

Janet was a nurse at Scarborough General for 30 years and was adored by colleagues and patients alike.

An accomplished gardener, cook, seamstress and volunteer with the Whitby Kinettes, Janet will be most remembered as a dear friend to all who knew her.

In lieu of flowers, donations may be made to the Arthritis Society or the Phototherapy Education and Research Centre at Women’s College Hospital.