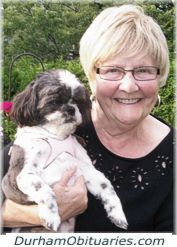 Libby Birch died peacefully and with great resolve on Friday, May 25th, 2018, at the age of 89 in Oshawa, Ontario.

She was surrounded with love as her children said goodbye and her spirit was released to the universe and beyond.

Libby was born in Belfast Ireland and grew up to be a fiercely independent woman, leaving Northern Ireland to marry Winston Douglas Birch, a Canadian WW II pilot, at the age of 19.

She came at life with spirited action in all pursuits.

She was a curious intellectual and went on to achieve two Bachelor’s Degrees and a Master’s Degree from Trent University later in life.

At the age of 82, she was recognized as the oldest graduate on record at Trent.

Libby also worked in daycare for Durham Region for 20 years.

She was intensely social and grew a cherished group of friends around activities such as writing classes, bridge, theater and travel.

She was a colorful, smart, funny woman and never cynical, not for a moment. She is survived by her children Lois, Robert, Michael, Elizabeth and Jo-Ann; and by her sister Anita Dunlop.

Memorial donations may be made in honor of her Grandson, Stephen Michael Birch to Association for Community Living, Durham North.