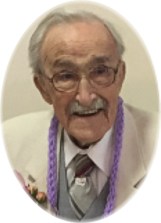 PERRY, Rev. Arthur  - At the Sunnybrook Veterans Centre, four months shy of his 102nd birthday on Monday, June 11, 2018, Rev. Arthur Perry died as he had lived, with grace and dignity.

His memory will forever remain in the heart of his wife, Linda Perry.

Rev. Perry was a minister in the Free Methodist Church of Canada from 1945-1980 however, he never stopped sharing encouraging sermons whenever he got a chance.  Arthur's curious and creative mind kept him engaged up until his final day.

He was richly blessed with many creative talents, in the arts; drawing, painting, carving, making violins, mandolins, and other instruments.  He could always find a use for discarded items-always the inventor, creating either from scratch, recycling, reusing, and repurposing, long before it became fashionable.

A broken down washing machine became an outboard motor for a homemade runabout, which invariably left him stranded in the middle of some lake, this never discouraged him. His book of memoirs said it all, 'What A Wonderful Life!'

A celebration of Arthur’s Life will take place on Monday, June 18, 2018 at the Uxbridge Free Methodist Church, 81 Reach Street, Uxbridge at 12p.m. with visitation one hour prior. Donations in memory of Arthur may be made to a CHARITY of choice.