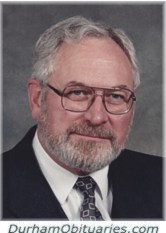 EDMONDSON, Norman Harry  - Norman Harry Edmondson died at home in Oshawa on Wednesday, June 13 with his beloved wife Judith and daughter Anne by his side.

He is also survived by his much loved elder daughter Jane and son-in-law Fred Stinson and his brother Paul and sister-in-law Janet and numerous nieces and nephews.

Norman was born on October 13, 1934 in Oshawa, where he received his early education.

While taking his B.A. at Queen’s he pursued his interest in drama, culminating in his performance as Hamlet.

Tempted to try his luck as an actor, he chose instead to pursue a career in law, to which end he earned his LLB at the University of Toronto Law School.

Still his interest in drama continued. In 1959 he auditioned for the role of Mirabel in The Way of the World, produced by the University Alumnae Dramatic Club.

Judith Teague was cast opposite him as Millamant. In 1961, following Norman’s call to the Bar, the two were married on August 12th. They have loved, cherished, and supported each other for nearly 57 years.

Norman practiced law, first in Whitby and then in Oshawa.

He also served on the board for the Whitby Station Gallery and had an ongoing active membership in the Oshawa Little Theatre.

All this came to an end in 1974, when he was appointed a Judge of the Provincial Court in Durham Region, where he presided until 2009.

Norman’s funeral will be held in St. George’s Memorial Church, 51 Centre St. S, Oshawa on Saturday, June 23rd at 11 am.

In lieu of flowers, memorial donations may be made to World Vision or Doctors Without Borders.