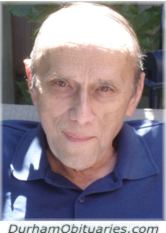 It is with heavy hearts that we announce the passing of Jack Grosjean on Wednesday, July 11th, 2018.

Jack was born and raised in Grafton, Ontario and was predeceased by his parents Philip and Marjorie Grosjean (nee Dudley), and by his siblings Carl (Kay), Barbara, and Nancy, all of whom he loved and missed dearly.

Jack was a skilled mechanic and a long-time employee of General Motors, and prior to that, worked for the Department of Highways in Cobourg.

There was nothing he couldn’t fix, even if it meant inventing something in order to do so. He was an avid woodworker, hunter, birdwatcher, lawn aficionado, squirrel-catcher, and dog-lover.

Jack was a grand story-teller, a prankster, a tease, an artist, and despite his denials, quite musical.

Every child he met was regaled with his rendition of “The Wabash Cannonball”, complete with foot-stomping and knee-slapping, and it never failed to get our wee ones dancing. His rendition of “I Got Rhythm” brought down the house every time. Together, he and Rosemary enjoyed their beautiful gardens, casino outings, crossword puzzles, trailers, and porch-time. Jack was a man of honour and of deeply held moral convictions and opinions.

He was a little man, but he never, ever backed down from anyone. He was strong, stubborn, and a lovable curmudgeon, yet he often wore his heart on his sleeve.

When he was happy, it was gloriously contagious. When he was mad, you knew it. When he singled you out for his particular brand of teasing, you felt special. When he loved you, it was fierce and unconditional. Jack was brave and resilient in the face of unrelenting losses. The health challenges that he and Rosemary faced during the last few years would have broken any one of us, but he endured the changes and the losses with grace, humour and dignity.

We are deeply saddened that his final years on this earth were so very difficult, but we know that he is now at peace. Jack did not want a funeral service of any kind, which will be no surprise to the people who knew him. He requested that he be interred in a private family service at a later date.

Jack was a remarkably generous donor throughout his life to a number of charitable causes including The Lung Association, The Heart and Stroke Foundation, St. John the Evangelist Catholic Church, The War Amps, and Juvenile Diabetic Association, but the charity that tugged at his heartstrings more than any other was The Make A Wish Foundation through The Hospital for Sick Children.

We want to thank the extraordinary staff of Fairview Lodge, Dr. Frances Kwan, our dad’s wonderful neighbours on Euclid and John Streets, and all the friends, relatives and extended in-law families who reached out to him during his lifetime, but particularly during his last few months. Your kindness mattered more than you could ever know.

Memorial donations gratefully accepted to the Make a Wish Foundation.