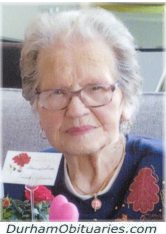 She leaves behind nieces, Anne Rozeluk, Stephanie Vineham and families and the late Sonia Szalawiga. Eva was born on February 22, 1923 in Halychana, Ukraine.

At the age of 19, she left Ukraine during the war and moved to Germany where she worked for a Bower in the fields.

In 1946, she moved to Poland to seek employment. In 1961, Eva immigrated to Canada where she settled with her sister Katherina and family in Geraldton, Ontario. Shortly after arriving from Europe, she worked at the local hospital in Geraldton.

Eva met Michael Sokoluk in Geraldton where they married on April 9, 1976. In 1984, they moved to Oshawa where they became members of St George's Ukranian Catholic Church in Oshawa.

Eva gave birth to a boy named Andrijko who passed away at the age of 3 months.

Divine Liturgy of Christian Burial, at ST. GEORGE THE GREAT MARTYR UKRAINIAN CATHOLIC CHURCH at 11am. Burial to Follow at St. Wolodymr and St. Olha Cemetery.