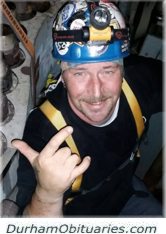 Jason is survived by Lee-Anne, his daughter Jaylee and his sons Tristan and Gavin.

He will be missed by his brothers Christopher and Jonathon, parents Ken and Sandy, his grandmother Trudy, many aunts, uncles, cousins, by his many friends especially Damon.

Jason was preceded in death by his father Vadek Puculek, his Bubcha and Jaja Puculek and his grandfather and life long welder Alvin Atkinson.

As a youngster he started his athletic career in Eringate baseball but then realized this meant running so he moved on to hockey.

Jay started with Faustian in Mimico and moved on as he grew up to Markham where he found he was the biggest kid on the team (this has its advantages).

Before Jay's career ended with a knee injury, he did get to achieve his goal of hip checking someone over the boards.