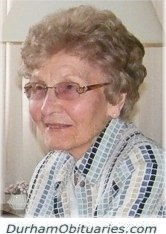 HOOEY, Irene May (nee Anderson) - We sadly announce the passing of Irene Hooey, on Friday, July 20, 2018, at Riverview Manor in Peterborough.

Predeceased by her parents, Blanche and William Anderson, and her brother Gordon of Oshawa.

Irene was born in Oshawa and lived all of her life, except for the last 3 years, in the Oshawa Whitby area.

After graduation from OCVI in 1938, Irene worked at General Motors in the Parts Department where she met her future husband, Bill. They were married in 1939 and celebrated over 52 years of marriage together.

After spending her early years raising two sons, Irene launched her second career as an excellent typist and all-round girl Friday for several Oshawa firms, culminating in her work as an assistant to chartered accountants.

She and Bill enjoyed their summer vacations in the Haliburton area at various cottages, eventually buying one of their own which they enjoyed for several years thereafter. They even went to their cottage in the winter, travelling the last few miles by snowmobile.

Irene was an active member of the Oshawa Lawn Bowling Club for many years. She and her bowling partner Phyllis Bates won the Oshawa and Ontario Provincial Ladies Pairs Bowling Championships in 1985.

Irene also enjoyed painting landscapes and florals. She enjoyed travelling to various destinations in Europe, the USA and the Caribbean. She had a long life full of many pleasant memories with her family and her enduring circle of friends.

A private family service will be held on Wednesday, July 25th, followed by interment at the MOUNT LAWN CEMETERY in Whitby.

Memorial donations to the Heart and Stroke Foundation would be appreciated in lieu of flowers. The family wishes to convey their sincere appreciation to the staff at Riverview Manor for their attentive care to Irene in her final years, and particularly in her final days.