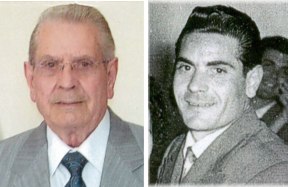 It is with profound sadness and heavy hearts, that we announce the passing of our beloved father, father-in-law and Nonno on Monday, July 23, 2018, with his children by his side, peacefully into the arms of our Lord.

Loving and devoted husband of Rina (predeceased) for 58 years.

Survived by brother Franco Trotta (Linda – predeceased). Antonio will be fondly remembered by his many nieces and nephews in Canada and the United States, as well as many friends and clients.

Tony was born February 2, 1930, in smalltown Torano Castello, Cosenza. He began his apprenticeship in barbering at a young age in his home town. While drafted in the army, he continued to apply his skills as a barber in service to the troops.

Migrating to Canada May 17, 1960 arriving in Halifax N.S. Began his new life in Oshawa with his new bride. Shortly upon arrival took a job at Ruby’s barbershop until 1970. After which he embarked on his own business venture creating Tony’s Barber Shop and Men’s Hairstyling on Simcoe Street South in Oshawa, where in the span of 46 years he owned and operated his barbershop, serving many generations of clients. Clients came from near and far for his exceptional service and lively banter that he was so famously known for.

In his 75th year of barbering Tony decided to retire and pursue his other passions, his garden, wine making, fishing and cooking. He enjoyed the company of his clients and spoke fondly of them as friends. He loved spending time with family and friends and would often tell stories of his adventures of his youth. At family gatherings he would entertain everyone with his opera singing.

Tony was a man of few words with a big heart, generous spirit and kind soul. He was always ready to help anyone in need. A family man, devoted, respected and admired.

We would like to thank Dr. Vlade Gagovski M.D. Toronto for his exceptional care and support the last few years, and Lakeridge Health Oshawa.

Visitation for family, friends, and clients of Tony will be held at the  ARMSTRONG FUNERAL HOME 124 King Street East, Oshawa on Thursday, July 26th from 2 until 4pm  &  7 until 9pm.

All family, friends and clients of Tony’s are invited to celebrate and honour the life and times of our beloved father.

Memorial donations are appreciated to the Ronald McDonald House or the Durham Region Humane Society.