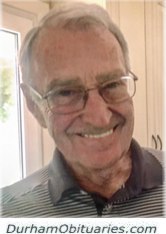 McAVOY, Raymond Joseph  - Passed away peacefully with family by his side at Lakeridge Health Oshawa, on Wednesday, August 2, 2018 in his 83rd year.

Raymond was a beloved and devoted husband to his wife Barbara (nee Pritchard) of 53 years.

Treasured father to his daughter Beth (Scott McCrory), his son John (Anne Marie Collins), and was an irreplaceable grandparent to Ryan, Patrick, Maegan, Liam and Graeme.

Raymond would like to be remembered at St. Gertrude’s Catholic Church in Oshawa, with a family and friends visitation an hour prior to his funeral mass scheduled at 11:00 a.m. Wednesday, August 8th. There will be a reception immediately following Mass, at 420 Wing RCAFA 1000 Stevenson Road, Oshawa, ON L1J 5P5.

Beth and John would like to express their sincere gratitude to the members of Oshawa Lakeridge Health Oshawa Critical Care Unit and Emergency team who provided Raymond with the utmost care in the management of his recent medical needs.

As well as the personal home care workers for his wife Barbara, and Ray’s team of physicians at Lakeridge Health and Sunnybrook Hospital, who supported Ray throughout the years in maintaining his health, and allowed him to live his life to the fullest.