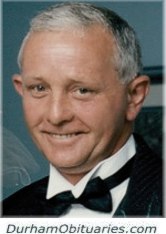 NITCHIE, Robert William “Bobby”  – It is with heavy hearts we announce the peaceful passing of Bobby Nitchie, after a short but courageous battle with cancer.

He passed away surrounded by his loving family on Tuesday July 31st, 2018 at Lakeridge Health Oshawa.

Bobby was predeceased by the love of his life Linda in 1999.

Adored father of Sherrie Snowden & her husband Rich and Rob Nitchie & his wife Becki. Proud and cherished grandpa of Brayden, Connor and Payton aka “Munch”.

He will be lovingly remembered by his sister Pauline Kennedy & her husband the late Paul.

Bobby meant so much to so many people and he will be sadly missed by all who knew him.

Bobby was retired from the produce department at Sobey’s Grocery Store and was known as the unofficial scout for all hockey teams. He had a tremendous passion for all hockey but most treasured watching his grandsons play. Bobby never missed an opportunity to be with his family at the trailer, games, dinners, events or morning coffee at the family shop.

His favourite spot was under the tree that was planted in Linda’s memory, they are now reunited to dance together again.

Please join with the family for visitation on Thursday, August 16th from 1pm to 3pm at ARMSTRONG FUNERAL HOME, 124 King Street East, Oshawa.

Following a private family interment, friends are invited to celebrate Bobby’s life with his family at Winchester Golf Club, Thursday, August 16th from 5pm to 8pm.

Anyone wishing to donate in memory of Bobby is asked to consider Hospital for Sick Children or Jumpstart Sports. These can be made directly through the CHARITY websites or at ARMSTRONG FUNERAL HOME.