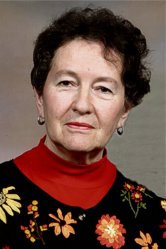 ARMSTRONG, Janet - Passed away peacefully on June 16, 2019, at South Muskoka Memorial Hospital after several months of failing health. Janet, in her 83rd year.

Before dairy farming and raising children came to dominate her life, she was a respected researcher on the physiology of exercise, publishing articles and presenting workshops on the prevention and treatment of athletic injuries. Later in her teaching career, she taught media studies and English.

After retirement in 2000, she continued her lifelong learning and teaching journey by travelling in the Middle East, researching Biblical history, and leading Bible studies at churches in Georgetown and Guelph. She also enjoyed gardening, writing book reviews for The Muskokan newspaper, and most of all, spending time with her family.

In 2017, she moved from the farm in Acton, where she resided for over 50 years, to Bracebridge, Ontario. She was a remarkable teacher, and a devoted mother and grandmother.

Friends will be received at the Jones Funeral Home, 11582 Trafalgar Rd., Georgetown on Monday June 24th, at 10:00 am until time of Memorial Service in the chapel at 11:00 am. Reception to follow. Cremation has taken place.

In memory, contributions to South Muskoka Hospital Foundation or World Vision would be appreciated.