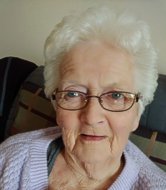 Passed away peacefully with family by her side at The Brant Centre in Burlington, on Tuesday, June 25th, 2019 at the age of 85.

Catherine was a woman of strong faith with devotion to the Blessed Virgin Mary. Both she and Patrick instilled this faith, as well as a deep love for Irish culture, particularly the Irish language.

As an expression of sympathy, donation to a charity of your choice would be sincerely appreciated by the family.