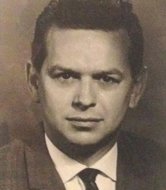 Ron is survived by his beloved wife of 69 years, Mary (nee Cline).

Filled with gratitude for the many years of Love Dad has given us, his death is mourned by his children and their spouses: Ron and Nancy Kemp, Kathryn and Brian Plumb, Bill Kemp, Rob and Barb Kemp, Doug and Laura Kemp and John and Naushin Kemp.

Born and raised in Hamilton, Ontario, Ron was a gifted athlete and respected businessman. While attending Central High School he played Hockey, Lacrosse and Football. During his High School years, he met the love-of-his-life Mary, his life-long cheerleader and devoted wife. Ron was one of the “formidable” centres for the Grimsby Peach Kings, a team that was recognized by the Canadian Hockey Hall of fame for their 1946-47 Provincial Championship.

Ron then went on to get his Commerce degree from Queen’s University in Kingston Ontario. Ron was President of Kemp Construction, a business his father started and that he built -up alongside his brothers Jim, Jack, Bud, Dave and Lorne.

He was the 1962-63 President of the Glendale Golf and Country Club and later became a longtime Member of the Hamilton Golf and Country Club where he maintained an impressive single-digit handicap. Ron was also an exceptional curler who came oh so close to making it to the Brier. A long-time friend described Ron as “one of the best all-around athletes to come out of Hamilton."

Ron was well-grounded and enjoyed simple things in life, like a hard day’s work outdoors, a good piece of fruit and a beautiful sunny day. His family and friends will forever miss his quiet wisdom, his gift with a poem and a well-told joke. He will be remembered as a thoughtful, generous man who loved his family and who lived life respectfully and with honesty.

With special thanks to his in-home care nurse Lilliane and to the kind Nurses, PSW staff and Volunteers at the Carpenter Hospice in Burlington Ontario, who took great care of Ron during his final days.

Per his wishes, cremation and a private family gathering will take place. Interment at a later date.

Donations in Ron’s memory to The Carpenter Hospice (also known as Burlington Rotary Community Hospice Inc.) would be appreciated by the family. Arrangements entrusted to Smith's Funeral Home, Burlington.