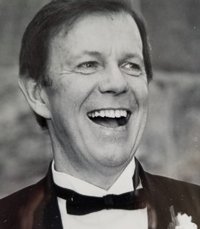 WALKER, Laurie - Laurie passed away surrounded by his loving family in his home in Milton on September 8, 2019, at the age of 76.

He was born in Burlington and grew up in Hamilton, and was the first child (with sister Ellen) of Marion and George Walker. Laurie attended Hamilton’s Delta High School, University of Toronto for Music, Teachers College, graduating with Honours in 1971.

Laurie married wife Carol Walker in 1968, and they were married 51 years, receiving their golden wedding anniversary certificate from the Prime Minister and Governor General. Laurie leaves behind his beautiful wife Carol, sons Alex and James, daughter Meredith and granddaughters Margaret and Isabel.

Laurie was an esteemed high school music teacher for such schools as Milton High School, Bolton High School, North Park Secondary and Gordon Graydon. Laurie finished his career at Stewarttown Middle School before he retired in 2005.

Laurie also was the church organist and Choirmaster at Grace Anglican Church in Milton for 14 years.

For most of Laurie’s adult life, his passion was music. Laurie was also a distinguished professional jazz pianist, performing shows in Toronto and the greater GTA.

Laurie was an avid lover of all animals, but he always had a special spot in his heart for his golden retrievers. Laurie thoroughly enjoyed sports, playing hockey well into his 50’s. Laurie touched so many people with his music and his love of teaching.

With all Laurie’s accomplishments, his beautiful wife, children and grand children are his most prized achievements. Laurie will be greatly missed.

Family and friends are invited to visit at the McKersie-Kocher funeral home, 114 Main St. E., Milton on Wednesday, September 11th from 7 pm to 9 pm. The funeral service will be held in the funeral home chapel on Thursday, September 12th at 11 am. Interment to follow at Milton Evergreen Cemetery.

As an expression of sympathy, memorial donations to St. Stephen’s Anglican Church would be appreciated.