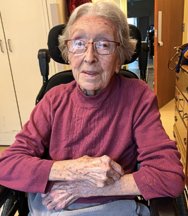 MANFORD, Elsie (Richards) - Elsie Manford (Richards) was born on November 19, 1923 in Bethnal Green, London, England. She lived an amazing, adventurous, brave life right until the end, which came this week on October 20th, 2019.

She was a proud WAAF in the British Royal Air Force, joining at age 17 in 1946 as an ACW1. She chose the Air Force over other branches of the military as the Air Force allowed women to wear pants.

She was stationed mainly in Bally Kelly, Ireland where she developed a love for Guinness and good times. During the war she met her husband, Malcolm Manford, to whom she was married for 55 years until he passed in 2001.

Her father, a WWI veteran, instilled in Elsie a love for the distant wilds of Canada, and she moved here with her family in 1957. She worked at Simpsons in Toronto in the “Men’s Belts” department before finally relocating to Milton in 1960, to their longtime home on Bell St.

Her love of nature, birds, water, and the Canadian outdoors was further supported when they purchased their cottage “up North” in 1965.

Elsie was curious and loving until the end, and enjoyed creative pursuits like singing, quilting, sewing, knitting, crocheting, and painting in watercolour. She was never afraid to swing a hammer when needed, and always took the shortcut – especially when it meant by canoe, or involved a glass of sherry.

She was a much-loved teacher at Milton Community Nursery School at St. Paul’s Church for over 15 years during the 60s and 70s.

We remember her as feisty, always a lady, with a willing ear and a cup of tea. She was accepting and kind, insisted on placemats at the table, and God help you if you wore a hat at the dinner table.

Sue and Al invite family and friends of Elsie to visit at McKersie Funeral Home in Milton for visitation this Friday, October 25th at 10am, followed by funeral services at 11am and refreshments to follow. Please remove your hat in her memory.