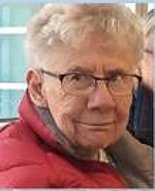 FRASER, Vivian Vasey - Vivian Vasey Fraser passed from this life with her family at her side on November 4th, 2019. Her adventurous spirit, humour, and strength of will were with her to the end.

She was predeceased by her husband of 68 years, Harry Robert (Bob) Fraser.

Vivian was born and raised in Hamilton, the daughter of Bertie and Hilda Vasey.

She began her work life as a legal secretary before starting a family with Bob. Her commitment to children’s learning started as a volunteer and member of the Bartonville’s PTA in Hamilton before being asked to join an experimental program as an educational assistant in the Hamilton School Board. She worked at Bell Cairn in the 1970’s followed by a decade and a half at the George R. Allen Elementary School where she was a fixture in the Jr. Kindergarten classes until retirement.

Bob and Vivian volunteered for over thirty years at the Canadian Warplane Heritage Foundation.

Thanks to the Wentworth Heights staff and PSWs who were part of her care team. Special thanks also to the Juravinski Hospital staff whose respect, care, and intellectual engagement made her last few weeks so meaningful.

In accordance with her beliefs, a private family gathering and cremation has taken place. Arrangements with Bay Gardens funeral homes.

The family requests that any donations in her memory be directed to the Canadian Warplane Heritage Museum’s Lancaster Support Club.

The Road Alone – Together – We Will Miss You.