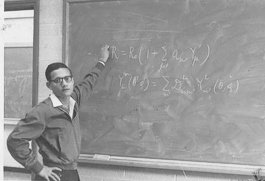 Rajat was born on May 6, 1935 in Raipur, India to Manmathanath Bhaduri and Suprobha Chakravarti (aka Rosie). He had a carefree, loving childhood.

The youngest of nine children, Rajat grew to be a beloved sibling, uncle, grand-uncle, and great grand-uncle. He made it a point to frequently phone and visit relatives near and far.

Rajat was an outstanding student winning numerous academic awards. He holds a B.Sc. and M.Sc. degrees from the University of Calcutta (Presidency College) where he won a silver and gold medal. He studied radio physics at the Atomic Energy Training School. He worked as a Research Assistant in Theoretical Physics at the Tata Institute of Fundamental Research (TIFR), before coming to McMaster University as a PhD student. He completed his PhD in Physics in two years under adviser Mel Preston. Rajat then went to Oxford University as a Research Assistant to Sir Rudolph Peierls.

Rajat joined the McMaster faculty in the Physics Department in 1968. He "retired" as Professor in June 2000, but continued publishing papers in theoretical physics until his final days. His work ethic and love for physics was boundless.

Professor Rajat Bhaduri's contribution to physics is internationally recognized. His passion and curiosity for physics was a driving force for his many accomplishments. Over sixty years he worked in many areas including: nuclear, particle, condensed matter, chaos theory, connections between number theory and physics, quantum mechanics and supersymmetry, statistical mechanics, Bose-Einstein Condensates, and astrophysics (including black holes).

He published three books - Structure of the Nucleus, Models of the Nucleon - from Quarks to Soliton, and Semi-Classical Physics, and around 200 scholarly papers.

He was a gifted teacher and mentor. He supervised many PhD and MSc. students. He was generous with his time and hospitality. Colleagues, visitors, and students alike were frequent guests for delicious dinner parties hosted with his loving wife Manju.

Despite his international profile, Rajat was a modest and down-to-earth person. His kindness and compassion led him to help many charitable and community causes. He showed great zeal and dedication in pursuing a wide range of hobbies such as bridge, tennis, table tennis, reading, guitar playing, cooking, gardening, biking to McMaster, and watching movies and cricket. He was active even this year, as he traveled internationally, played doubles tennis, won a team event in the ACBL Hamilton Bridge Sectional Tournament in July, and walked the Terry Fox Run in September.

Rajat's positive energy, enthusiasm, and his ability to always see the good in people helped him to be loved by family, friends, colleagues, and community alike.

Rajat was loved as a husband, father, and grandfather. He is survived by his wife Manju, his children Ron, Ranjan, and Mallika, his son-in-law Manash, and his grandchildren Madan, Milan, and Nikhil.

Visitation will take place at Bay Gardens funeral home, 1010 Botanical Drive, BURLINGTON on Friday, November 22nd from 9:30 a.m. until time of Funeral Service there at 11:30 a.m.