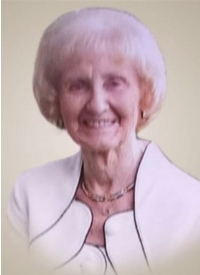 It is with heavy hearts we announce the passing of Theresa.

Terry, as she was known to her friends and family, passed away peacefully, at the age of 96.

She was predeceased by her loving husband Del in 2009. They had been married for 55 years.

Terry had spent her early years in sales as she loved having a part-time position. She was always active, loving golf with her friends and a game of Bridge at the 19th hole.

Terry loved to dance and was the first on the dance floor with her favourite partner Del.

Theresa was struck with Alzheimer's Disease in her early 80's and moved from her home in Toronto to St. Catharines to live at The Royal Henley Retirement Home close to her daughter, Connie King. Theresa lived there until her passing New Year's Eve 2021.

She is mourned by her only child Constance King, her son-in-law Terrance King, and her grandsons, Casey Roberts and Luke Roberts. Remembered always by Marlene Evason, favourite niece to Aunt Terry.

The family is grateful for the care and love given to her over the many years by the staff and in particular Dr. Jayawarden, at The Royal Henley.

A funeral will be held at the gravesite in the Garden of the Apostles at Glendale Memorial Gardens in Etobicoke, Ontario, where she will be buried beside her husband Cecil Delmer Goughnour, on Saturday, January 8, 2022 at 1 p.m.

In lieu of flowers, donations to the Alzheimer Society ares appreciated