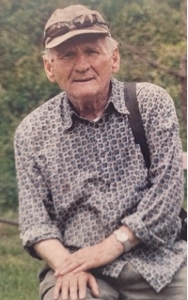 Hans Paetzold passed away peacefully, in his 90th year, at Sunnyside Home in Kitchener.

Hans immigrated to Canada from Berlin, Germany in 1953.

After working out west in Saskatoon, he settled in Toronto and began working for Eaton's where he met Donna Shaw.

They married in 1964 and raised their three children in and around the outskirts of Toronto, moving to Newmarket in 1975.

After Donna passed in 1994, and grandchildren came into Hans' life, he was a dedicated and loving Opa, following their interests and pursuits with pride and interest.

. He will be so very missed by all of us.

The family would like to thank Dr. George Heckman for the care and hope that he gave Hans in the last year.

In addition, they are sincerely grateful to the staff on Pioneer Tower at Sunnyside Home in Kitchener for their kindness and the home that they gave to Hans during his short time there.

A private family funeral will be held on Saturday, January 8, 2022 in Newmarket, followed by interment at St. John's Cemetery.

As expressions of sympathy, donations to Sunnyside Home in Kitchener or the Metro Toronto Zoo would be appreciated by the family.