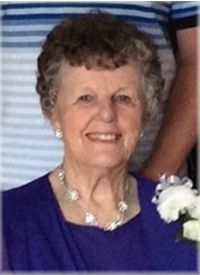 Doris Valeria (Hammond) Mills in her 96th year, was the beloved wife of the late Jack Mills (2006).

She was the dear mother of Richard (Ruth) of Milton, Gordon (Linda) of Welland, Peter (Nicole) of Ottawa, Paul (Andrea) of Vancouver and Catherine (Arnold Nicholson) of Vancouver Island.

Will be fondly remembered by the late Frank Petty.

Interment of cremated remains to be held in Woodlawn Memorial Park, Guelph, at a later date.

As expressions of sympathy, donations to Guide Dogs Canada would be appreciated by the family.