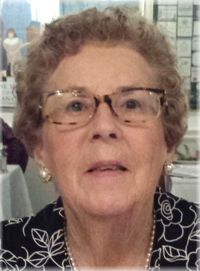 Margaret passed away at Matthews House Hospice in Alliston after a life filled with the joys of family, friends and community service in Weston.

Margaret loved her family more than words can convey, and remained keenly interested in their exploits and achievements to the end of her days.

Her household was her pride and joy, immaculate and inviting. Great coffee was her defining beverage, and she succumbed to the charms of a stronger libation, gin and tonic, only later in her life (and then, only abstemiously).

Fastidious about her coiffure, Margaret always believed in being well-attired for all occasions ("better to be looked over than to be overlooked").

Possessed of probity and the courage of her convictions, if you fell afoul of her views, she would famously wag her finger and admonish you with her memorable, "now, listen!"

In her latter years, her indomitable physical and emotional strength saw her through a series of medical misadventures until, at long last, she decided to call it a day – on her terms – in the compassionate setting of Matthews House Hospice in Alliston.

A private celebration of Margaret's life will be held in the Spring, with a gathering of family and friends.

Memorial donations in Margaret's honour may be made to Matthews House Hospice, Alliston.