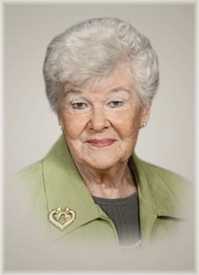 Marilyn was raised in Hudson, Quebec and later moved to Montreal and attended Montreal School for Girls.

In 1941, she moved to Ottawa, Ontario. Upon graduating from Nepean High School in 1948, Marilyn went on to earn her Registered Nurse Certificate from the Ottawa Civic Hospital in 1951.

Her nursing capabilities enabled her to advance to head nurse on the private duty floor.

After spending a year away nursing at the Vancouver General Hospital, she returned as head nurse again on the private floor at the Ottawa Civic Hospital. It was there in 1955, that she met her husband-to-be, Marvin Olson from Saskatchewan, who was studying medicine at Queens University in Kingston, Ontario, with some courses in Ottawa.

They were married in 1957 and have lived in the Town of Oakville ever since.

Marilyn was greatly involved in church activities including work with women's groups and youth groups. She loved skiing, swimming, travelling, singing in choirs and home hospitality. Marilyn and Marvin went on short-term medical missions to many countries of the world, from Nepal to Ecuador.

A private service will be held.

In lieu of flowers, donations can be made to Kerr Street Mission in Oakville.