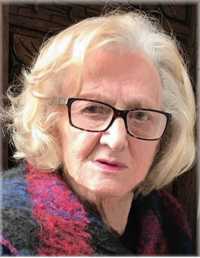 She never fully regained consciousness after suffering a heart attack the week before.

Granddaughter Elvi and family were with her at the end.

As a teenager, she biked to early morning shift work alongside her mother at the cotton mill in nearby Pordenone. Three years after she married Marino, he headed to Canada for work.

Caterina and Rudy joined him a year later in Toronto. Tiziana was born soon after.

In the early years, she sent packages of food and money back to family in the old country. Nelda was fiercely protective of her family. Marino's passing was a blow that let loose an inchoate anger at the world. But when Tiziana died two years later, suddenly, unexpectedly, it was a blow she would never recover from.

Although physically healthy, Nelda fell into an ever-deepening depression.

Nearing the end, all she wanted was to slip away quietly from this life. Heartfelt thanks to the compassionate staff at Juravinski Hospital and to the staff at Aberdeen Gardens for their kind support.

As per her wishes, there will be no funeral service.

Nelda was from a generation that didn't openly express affection. It was only in the later years that she would respond to "I love you, mamma, I love you nonna" with "anch'io ti amo.".