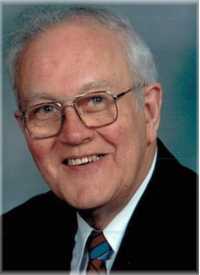 John Challis, known to his family as Jack, ended a life of learning, travel, and service to his community after a brief illness, on August 5, 2022.

He was 94. Born June 18, 1928, the youngest of three children of the late James and May (Hasseldine) Challis of the Beach area of Toronto.

Married May 2, 1953 to Barbara Bromley of Grimsby; an inseparable partnership filled with travel, the arts, history, gardening and family.

Long-time resident of Applewood Acres, and Niagara-on-the-Lake, he and Barb moved to Brampton in 2012, spending recent months in long-term care.

Also survived by many nephews and nieces. Predeceased by sister, Lillian Balla and her husband Nick; and brother, Jim Challis (Bea).

Friends will be received at the Andrews Community Funeral Centre, 8190 Dixie Road, Brampton, on Friday, August 12th from 4-8 p.m. A Funeral Service will be held in the funeral home chapel on Saturday, August 13th at 11 a.m. followed by burial in Oakville, ON.