Paula will be joining her beloved husband Joseph (Pepi) in Heaven.

NAKATA, Sakae Sarah  - On Sunday, October 22, 2017, Sakae Sarah Nakata passed away peacefully and suddenly in her sleep at 91 years young.

ARMITAGE, Leslie  - It is with great sadnesss of the passing of Mr. Leslie Armitage, Sunday, October 22, 2017 at St. Joseph's at Fleming in Peterborough, Ontario.

Mr. Armitage was 87 years old and formerly from Toronto.

Daughter of Maureen Burrows and the late Robert (1994).

PETERSEN, Kell  - It is with profound sadness that the family of Kell Petersen share the news of his passing on Sunday, October 22nd at the age of 86 years.

This loss of our treasured husband, Dad/Far and Morfar is deeply felt.

It is with broken hearts that we announce the sudden loss and unexpected passing of our beloved Jenny. Predeceased by her loving husband, Richard Woods (2014) and her brother James Treloar (2010) and survived by her younger sister, Mary Treloar and cousin, Bill Treloar.

EDWARDS, John Stephen  - John was born on November 30, 1957 in Toronto, Ontario to Thora and Jim Edwards and was youngest brother to Anne and Jim.

MacMILLAN, Ian Paterson "Curly"  - Passed away peacefully at Chester Village on October 22, 2017, in his 88th year.

Predeceased by his wife Charlotte and youngest son Bill.

Daughter of Harry and Helen Shaw.

Barbara Jacobs, loving and caring mother and mother-in-law of Jonathan Jacobs and Michelle Vigod and proud GraGra of Cole Jacobs.

After a courageous battle with basal cell cancer and losing his eyesight, Paul passed away at home in the early hours of the morning. Paul called himself a "number cruncher", sometimes a "bean counter", and occasionally he could be heard to say, "Remember, 2 plus 2 equal 4, not 3 ½, not 4 ½ , but, exactly 4"! Paul's numbers were precise and exact, with an overdose of integrity.

CASE, Patricia Arlene  - Passed away peacefully on Saturday, October 21, 2017 at Hill House Hospice in Richmond Hill, at the age of 88.

Predeceased by her loving husband Howard. Cherished mother of Michael, Stephen and Tricia.

DENTAMARO, Rosa   - Peacefully, with family by her side, after a battle with cancer, at Etobicoke General Hospital, on Saturday, October 21, 2017, Rosa Dentamaro, at the age of 70, beloved wife of Francesco Dentamaro.

LOCKE, Donald Charles  - Peacefully passed away in his sleep at the Tony Stacey Centre on Saturday, October 21, 2017 in his 86th year.

Peacefully surrounded by his family at Lakeridge Health Oshawa on October 21st, 2017 at the age of 79.

BOZ, Frank  - Died peacefully at home surrounded by his family on October 21, 2017 at the age of 89, after a lengthy illness that he fought against with strength and dignity.

Born as Branko Bozicevic in Karlovac, Croatia, Frank is survived by his beloved wife Nada of 60 years. 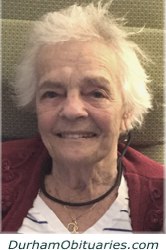 WHITE, Ida Emily  - It is with heavy hearts that we announce the sudden passing of Ida Emily White, peacefully, surrounded by her family at Lakeridge Health Oshawa on Saturday, October 21, 2017 at age 86.

Dear sister of Terri, Barbara (Mario) and the late Harold.

GRENON, Jean Brania (nee WISNIEWSKI)  - After being hospitalized with a brief illness, Jean passed away suddenly on Saturday, October 21, 2017 surrounded by her family at Toronto General Hospital.

Peacefully on Saturday, October 21, 2017 at Providence Health Care, with his family by his side.

GRANT, Leslie Keith  - Passed away peacefully at his home on Saturday, October 21, 2017.

She leaves her son, Sean Holloway, her daughter Gillian Holloway, Shermane Antoine and her grandchildren: Liam, Elijah, Claire and Cameron: and many close friends and family.

BRADSTREET, Allan Douglas  - Peacefully with family by his side at Peterborough Regional Health Centre, October 21, 2017.

Karol died after a brief period with cancer in the Palliative Care Unit of Markham Stouffville Hospital.

Karol was the loving wife of Wayne Latta for 56 years.