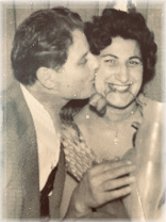 BORG, Frances Winnifred Sanci - The Queen of Kensington Market has passed peacefully on July 15, 2019 in her 95th year.

Long live the memories of a revered mother, mother-in-law, beloved grandmother, and a fiercely-loyal friend.

Predeceased by her husband, Anthony, and sister Anne.

She also leaves eight grandchildren: David, Natalie (Albert) and Antonina; Madeleine and Julian; Adam, Alyssha and Sara. Nanny Frances had an unusually gifted and loving bond with every single one of them.

Born in Toronto in 1924, Frances grew up in Kensington Market, then known as the Jewish Market. When her idolized father Sam died suddenly, Frances and Anne worked hard with their widowed mother, Antonina, in the family store which sold only bananas.

Her values of loyalty, respect for diversity, and community were instilled in all those who came across her path. Aside from being a regal matriarch, a fabulous cook, skilful artist, and joyous singer, she had life-long friends particularly those in the Sanci Banana gang.

Frances was indeed a ‘card’ as well as a cagey card-player. Her legacy includes having been a confidante to scores of people. She also helped settle many family members from Sicily and immigrants from around the globe.

Her grace, smile, stoicism and a laconic sense of humour were generously shared with all right to the end of her full life.

Special thanks to the Lakeside staff and her caregivers who made her last few months comfortable.

Visitation will be Wednesday, July 17th from 2:00-9:00 pm at the Cardinal Funeral Home, Bathurst Chapel, Toronto.

Donations in lieu of flowers may be made to Sick Children’s Hospital, Salvation Army or a charity of your choice.