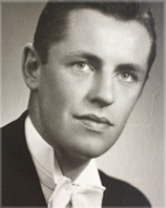 John grew up in North Toronto attending John Ross Robertson Public School, Crescent School, and graduating from St. Andrew’s College School just as WWII ended. He studied Medicine at U of T and began as a family physician in 1952 where he practiced for 40 years.

JB loved life. He was an athlete—boxing, hockey and cricket as a teenager; hockey, golf, curling, tennis, running, walking into the final days of his life. He was a piano player and a photographer. He loved Dave Brubeck, Miles Davis, Louis Armstrong and Ella Fitzgerald. He was a reader. He loved W.O.Mitchell, Dylan Thomas and Henning Mankell. In the early years he joined the Lions Club and started a ‘sock hop’ for local kids and in the 60’s he supported Pat’s volunteer work with youth. He got elected to the board of the Ontario Medical Association to work to keep the connection between doctors and their patients in the early days of Medicare. He cared deeply about politics, was a lifelong Liberal and was actively distressed by the rise of right wing populism.

But of all the things he loved in his life, there were two that surpassed the rest. The first was Pat. He loved his Bahamian girl completely. The second was cutting through the morning mist on Lake Opeongo in his canoe. The tackle box and the fish were an excuse.

JB’s family is very grateful to all the nurses and doctors on the stroke floor at Mackenzie Health and to the palliative team. Thank you all for your fine care.

If you would like to make a donation in JB’s name, he would love you to support the Friends of Algonquin Park or the Mackenzie Health Foundation.

We will hold a service in JB’s memory in September. Arrangements entrusted to Marshall Funeral Home, Richmond Hill, ON.