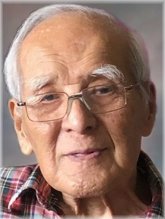 During the Japanese-Canadians’ evacuation from the West coast in 1942, Fred was separated from his family at the age of 18. He was sent by train across the country to western Ontario, where he first worked in a coal yard, and later, on a tobacco farm.

Having completed high school, Fred was reunited with his family in London (Ontario) where he completed his undergraduate and graduate studies at the University of Western Ontario.

He worked in defense medical research in Toronto and continued in the pharmaceutical sector in Montreal until 1964, when the family returned to Toronto. Fred Sunahara was Professor of Pharmacology (Emeritus) at the University of Toronto Medical and Dental Schools for more than 35 years, and was fondly respected by his students and colleagues.

As one of the venerated and beloved founders of the Momiji Health Care Society (1978) and the Seniors Residence (1992), Fred lobbied and struck the first shovel to establish a home and eldercare for seniors of Japanese descent.

His parents had obviously taught him the importance of giving back to community. In recognition of this effort, he was awarded the Order of the Rising Sun with Gold Rays and Rosette (1988) by the Japanese government.

Interestingly, Fred began to taste the fruits of his labour about 5½ years ago, by becoming a tenant at Momiji, where he chose to live until his death.

Many thanks to the staff at the Momiji Seniors Residence, Dr. Alan Toguri and Bev, Dr. Roy K. Chan, and his Palliative Care Team, who provided attentive and respectful care and support. Special thanks to private caregivers Tess, Marita, Evelyn and Marilyn, who provided round-the-clock loving care to him and us during the last few months.

In lieu of koden and flowers, the family requests donations to Momiji Health Care Society.