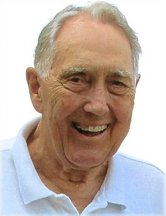 After attending University of Toronto Schools, Dick graduated from Western University in 1954. His love of all sports and especially football allowed him to play for the Toronto Argonauts in 1956 and the Oakville Black Knights and Balmy Beach in the following years.

During this same time he worked in advertising for Spitzer & Mills. In 1960, he found his true calling as an educator and began to work for the Etobicoke District School Board. During his time teaching, he continued to coach football, wrestling and many other sports providing as many opportunities for others as he could.

He continued to take on greater leadership roles throughout his career, eventually assuming the responsibility of principal for 10 years before retiring in 1991.

In retirement, Dick continued to enjoy traveling the world with his wife, Betty. He took great joy in seeing all the places that he had read and taught about in his many years delivering history lessons.

Throughout his life one constant was his enthusiasm for visiting with old friends and meeting new ones. Dick will be remembered for his kind, gentle manner, a constant smile, a warm sense of humour, his wealth of stories that he was so willing to share, his willingness to encourage others to always achieve their best but mostly for his love of family and friends.

Many thanks to the doctors and staff at Mississauga Trillium Hospital for their gentle care.

Donations can be made to the Canadian Cancer Society.