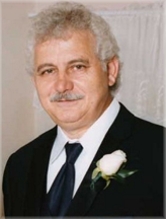 Steve passed away peacefully after his short battle with pancreatic cancer on Sunday, July 21, 2019 at the Princess Margaret Cancer Centre.

He was born on August 29, 1947 in the village of Karyes (Arahova), Laconia, Greece, to the late Pantelis and Anna Mavraidis.

Steve immigrated to Canada in 1965 with his father. For over 40 years, he worked as an exceptional bartender.

Steve was an avid fisherman who loved spending time with his family and friends, cooking and working in his beautiful garden. He enjoyed watching sports, especially cheering on his beloved AEK FC and Boston Bruins. He was a proud and active member of the Adelphotis Arahoviton Association.

Steve is survived by his wife, the love of his life of 42 years Christine.

He will be sadly missed by his adored children Telly (Vivian), Ted, Annie, and Stacy (Greg). Proud and caring Grandfather to Chrisa, Steven, Victoria, George, and Nicholas.

Loving brother to Theotokis (Kelly) and Fotini. He was a kind and thoughtful uncle, brother-in-law, and friend. In addition to his parents, he was preceded in death by his sister-in-law Sofia, nephew Sean, father-in-law Theodoros, brother-in-law Yiannis, and mother-in-law Anastasia.

His generous and giving spirit touched the lives of all who were fortunate enough to know him. He was selfless in all his actions and ensured that those around him knew that they could always count on him. Steve was a kind-hearted and gentle man who was loved and respected by everyone he met and will be greatly missed.

The family is especially grateful to all the Palliative Care staff at the Princess Margaret Cancer Centre for their outstanding effort and compassionate care.