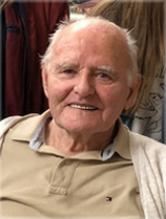 ROELOFSEN, John (Jannes)  -  We are deeply saddened by the passing of John (Jannes) Roelofsen, peacefully in his sleep after a lengthy illness, in Brampton, Ontario on Tuesday, August 20, 2019 at age 85.

He will be greatly missed by his loving wife of 59 years Nelly (Neeltje, née van der Mey), his children Jeanette (Charles), Patricia (Jim), and Theresa (Tom), and his dear grandchildren Adriana, Cassandra, Fiona and Kieran.

John was born in the Netherlands on May 12, 1934, and immigrated to Canada in 1954. As a new immigrant to Canada, he worked several jobs from waxing bowling alleys to planting flower bulbs. He met his wife-to-be (Nelly) while working in the greenhouses of his future father-in-law. After they were married, he worked for 29 years in the Parks and Recreation Department of the City of North York. After his retirement, he enjoyed travelling with his wife, spending many lengthy summers at the cottage, volunteering, and working in the wood shop at Holland Christian Homes. John will always be remembered as someone quick to offer a hand, for his mischievous grin, and for always at least one home or cottage project in the works.