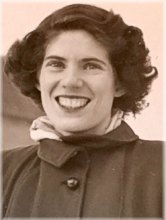 Beverley was born on April 23, 1929 in Toronto to Gilbert and Annie Bird.

She grew up in Leaside with her sisters Norah, Marjorie, and brother Terry. The "Bird Sisters" sang at weddings and other occasions.

She met her husband Alan Edward Hayne on the steps of the first school she taught at, and they married in 1951. Beverley and Alan enjoyed many years of loving marriage until his death in 1990.

Beverley had a second home in St Peter's Anglican Church in Cobourg and was very active in the St Peter's community.

The family thanks the loving and caring teams at Palisade Gardens, at Oasis in New Horizons Tower, and at Toronto General Hospital.

In lieu of flowers, the family would appreciate donations to St Peter's Anglican Church, Cobourg, Ontario.