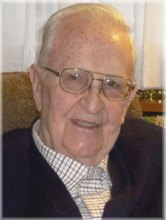 Richard Thomas Hearn passed away peacefully at the Sunnybrook Hospital's Veterans Centre in Toronto on Tuesday, August 20th at the age of 95.

Born in Grimsby, Ontario, he was the youngest son of the late Thomas and Gertrude.

Richard lived his whole adult life in Hamilton, Ontario. At 17, he joined the Royal Canadian Navy, serving in the Battle of the Atlantic in World War II.

Having safely returned to Hamilton, in 1953 he met the love of his life, Mary (nee Kraynick), with whom he had his son David and spent many happy years.

Richard worked for over 40 years at the Westinghouse Electric Company from which he retired in 1986. A community advocate, for many years he was an active member of Binkley United Church, where he served on many boards and committees and of Meridian Masonic Lodge #687 in Ancaster.

A skilled wood-crafter and an avid gardener, he succeeded in growing several now towering trees around our home from seed.

Survived, loved and much missed by his son David, David's partner Monika Spudas, nieces and nephews including Brian and Beverly Whitworth, Harry and Betty Jolley, Ken and Barbara Gerrard and Wayne and Elizabeth Hill. Predeceased by his wife Mary (nee Kraynick) and siblings Edward, Stanley, Edith and Irene.

Sincere thanks to the staff of Sunnybrook Hospital's Veterans Centre who provided diligent care and warm community to Richard in the last two years of his life.

In lieu of flowers, please consider a donation to the Sunnybrook Foundation, The Veterans Comfort Fund 2075 Bayview Avenue, Toronto, ON M4N 3M5. "They were honoured in their generations, and were the glory of their times.".